Opening Reception, Friday, January 12, 2007 from 5-9 pm @ Artfirm
artists will be in attendance
Show runs from January 12 – February 10, 2007
This exhibition is in conjunction with The Triangle Gallery of Visual Arts: Walking on a Thin Line, Third Annual Winter Art Stroll

alignment: the line or lines so formed; relative to a point of view. A state of agreement among persons with a common cause or viewpoint. At its most basic level, drawing is a series of marks made on a surface by a human being. Drawing can be, a “thinking” or “reflective” practice that is a core tenant in the visual arts. A part of visual language, drawing is equal or parallel to the spoken or written word, communicating an expression in the form of mark making.

It is the basic response to the manufactured bombardment in the current era of art making. “alignment”, will focus on the distinct mark making of four ArtFirm artists: John Boletta, Chrissy Cheung, Robert Pierce and Carl White. 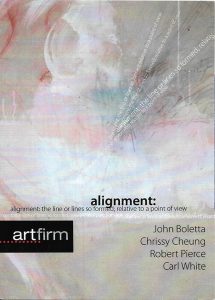